Monster trucks are awesome.  You can drive over anything, and you have to get the stair car from Arrested Development just to climb into them.  But it might not be the best car day to day. What if you just want to lift your truck a little bit?  If you’re just going for a cooler look or bought some new wheels and tires that suddenly don’t fit?  You can lift it just a little, but it’s easy to do it wrong.  Or you could just go with a lift kit from ReadyLift and get it right.

ReadyLift Suspension was founded when the owners saw everybody doing it wrong.  Many trucks come with what’s called a torsion bar front suspension.  If you know all about torsion bars, you can skip this bit.  If you don’t, pretend you’re a kid for a moment.  You’re sitting on a tire swing in the backyard, and you’re winding it up, twisting the rope until your feet can’t touch the ground anymore.  Then you pick up those feet and go spinning.

This is known as torsion, the resistance you get from twisting something along its length.  Torsion bars can take several forms, but for truck suspension, a torsion bar is generally a length of metal running from the lower control arm of the front suspension back along the truck to terminate at the frame.

An advantage of torsion bar suspension is that you can use a torsion bar lift kit to raise and lower your truck slightly.  If you twist the bar, it drops the lower control arm and you get more ride height.  But this needs to be done right.  When ReadyLift started, they saw a bunch of guys just removing the key, twisting the bar, and putting the same key into a new position on the hex pattern.

There are several problems with this.  Stock keys aren’t necessarily designed to take these kinds of pressures, and could break or wear around the fitting.  But more immediately, it can ruin your ride quality.  This can stretch factory shocks to their maximum, which means the front suspension has no downward dampening.  It can also bottom out the upper control arms.  It effectively eliminates the front suspension altogether. 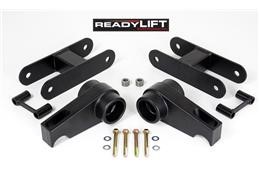 The jump you get from twisting a factory key is often too great for the suspension.  ReadyLift torsion keys are precisely designed for lifting.  They’re strong enough and measured exactly per truck.  Furthermore, ReadyLift’s torsion-based lift kits, like the 69-3070 for the Chevy Colorado, come with special brackets that extend the reach of your shocks, along with shackles for your rear leaf springs.

There’s no risk of bottoming out your shocks or ruining your ride.  Your truck will ride as smoothly as ever, just a little higher, a little cooler, and a little more capable.

But not all trucks have torsion bar front suspension.  Many use struts, like cars.  ReadyLift covers this, as well.  Their strut-based lift kits use their Smart Strut extension fittings, which securely bolt between the top of your struts and your truck’s strut towers.  These kits also include rear shackles, such as the 69-4510 for the Nissan Frontier; or E-coated, cast iron blocks for the rear suspension.

So yes, there is a cheaper solution than going for a monster truck suspension lift.  Lift your truck enough to install your new tires and look awesome.  And do it right with ReadyLift.