It’s summer, and it’s time to hit the American vacationscape.  And for the first time, you’re towing a trailer.  Maybe it’s a camper, a car carrier, a boat, or maybe it’s just a couple of bikes or kayaks.  But you’re looking at hitches and they keep mentioning classes and inches and adding wheels and something about goose heads?  And right now you’re about ready to just put the trailer up on Craigslist and hope you don’t get murdered when the buyer offers to meet you on the other side of town. 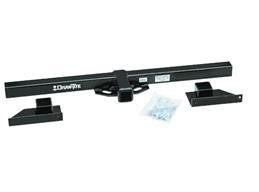 Don’t, friends.  The terminology of towing can get a little screwy at first, but it’s not unfathomable.  Here’s a quick guide to trailer hitch classes, and the specific Draw Tite trailer hitch you should get.

First, a little glossary.  The Gross Trailer Weight Rating, or GTWR, is just about what it sounds like.  It’s the total weight of the trailer you’re towing.  That means the trailer itself and the weight on it.  So an 1800 lb Factory Five 818 that you’re towing to the track, mounted on a 400 lb trailer, will have a GTWR of 2200 lbs. 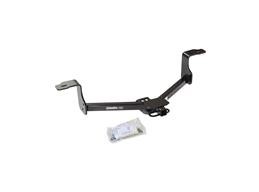 GTWR is different than Tongue Weight, or TW, which is the downward force the trailer puts on the vehicle.  It is recommended that the tongue weight should fall between 9 and 15 percent of the GTWR.  Too light, and you’ll run into a dangerous effect called trailer sway, in which the wind pushes against the trailer and knocks it around.  Too heavy, and you’ll reduce pressure on the front suspension, which will drastically affect the the handling.

Now, the Society of Automotive Engineers don’t just have an awesome racing series.  They do alot of other cool stuff, too.  The SAE developed the class system for GTWR to help keep everybody safe.  The classes are as follows:

Class I hitches are for lightweight towing, such as small popup campers, single motorcycle trailers, pistol-shaped barbecue smokers, and couch surfers.  This is also the hitch you want if you’re looking to mount a hitch accessory like a bike rack or suspended cargo carrier.

Draw Tite offers a standard class I hitch, as well as their awesome Invisi-Hitch, which will hide a little further back, as not to ruin the beautiful lines of your ride. 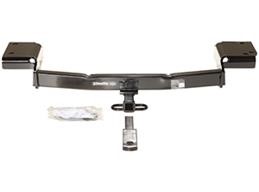 Class II hitches can handle a little more.  Single car trailers (depending on the car being towed), smaller boats and jetskis, or a pair of young unicorns.  (No unicorns were available for weighing, so we substituted horses.) 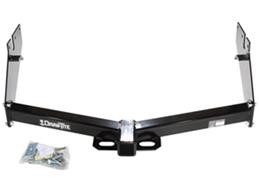 If you’re towing a car or a boat bigger than 18,’ you’ll want at least a class III hitch.  Large campers, the statue of Paul Bunyan in Bangor, Maine…that sort of thing.  Class III hitches tend to be available only for pickups, large vans, and large SUVs.

You guessed it – class IV is even tougher.  In fact, it’s twice as heavy duty as class III.  The cool thing about class III and IV hitch receivers is that you can use them with class I and II hitches and accessories.  You just need an adaptor.

Draw Tite’s class IV selection is just as good as their class III. 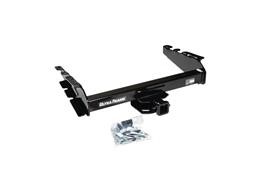 If the load on your trailer was put there by a forklift , you probably want class V.  They can also come in handy if you’re in Rio de Janeiro in you need to steal a bank vault.  Not just rob a bank vault, but steal an entire bank vault.  You can tether it behind a couple of NOS-prepped Dodge Chargers with these class V beasts (somehow) installed, and you’re good to go.  You can drag that vault anywhere.

Except that this wouldn’t work at all.  Yeah, don’t try that.  But you can tow rational, normal things with Draw Tite’s super tough class V hitch.

Weight distributing hitch – This is a device that will help spread the tongue weight out between the tow vehicle and the trailer.  It’s handy for especially heavy loads.

Gooseneck hitch – Because it kindof sortof looks like some kind of transformer goose, a gooseneck trailer is pulled from the center of a truck bed, rather than behind it.  This centers the trailer’s weight on the truck to prevent poor distribution.

Fifth wheel – Most commonly seen on semi tractors, a fifth wheel hitch is designed for the heaviest loads.  Shaped like a wheel, it is meant to distribute the trailer’s contact weight over an area larger than a common ball hitch.  These are also available for pickup trucks.

So we hope that clears up a few things for you.  Check out your vehicle’s specific tow rating and mounting options before purchasing your own Draw-Tite hitch.