LEDs are undoubtedly the future of lighting.  They’re durable, efficient, and last forever.  Even longer than this infernal election season.  But they come at a premium, while tried and tested Halogen bulbs tend to be far more affordable.  So, do the benefits make automotive LEDs worth the cost?  Let’s find out.

Every enthusiast’s vehicle has a budget.  How much should I spend on upgrades?  On maintenance?  On the car itself?  We all know that given enough money, we could build exactly the vehicle we want, but that can be a pricey bottom line.  Instead, we’re forced to make compromises.  Do I need that extra 3 hp?  That extra inch of suspension travel?  Such a shiny set of valve covers?  So most of us would choose LED lighting if performance was our only factor to consider.  But cost is often a greater factor.

To help us decide if they’re worth the extra cash, we’ve selected two lights by the same manufacturer, the awesome and legendary KC Hilites.  Both are direct replacements for JK Jeep Wranglers.  Both have hard polycarbonate coated lenses for durability.  Both are easy to install.  But the LED set costs hundreds more than the Halogen set.  Let’s get into some details. 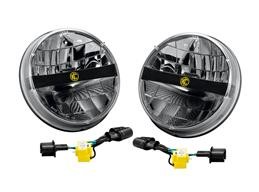 It’s difficult to compare the brightness of an LED bulb with that of a Halogen bulb, because there are different ways to measure light output.  LED brightness is usually measured in lumens.  Our example LED headlights put out 1100 low beam lumens and 1650 high beam lumens.  But lumens only measure the potential light at the source, while lux measures the intensity of that light reflected off of an object, and candela measures the volume of light within the lighting cone.

It can all be a bit confusing, because the Halogen listed above also has 1100/1650 lumens.  But the LED system likely has a greater lux count.  Halogens tend to do better with candela, though.  It’s likely that the LEDs are what we would consider to be “brighter.”  But maybe not so much brighter that you would notice a significant difference.

The beam distance, the effective range, of the LED lights is 529 meters for the high beams, and 424 meters for the low.  KC did not post a beam distance for the Halogen units, but since they are OE replacement headlights, they’re estimated to have similar performance.  Stock JK headlights are known to be particularly lackluster at 500 meters.  So the LED units win again, but perhaps not by much of a margin, especially a usable margin.  Most of the time, if you need to upgrade the lights in your JK, it’s to light the area immediately around you, so you can get to the end of the trail.  On the road or highway, the LED and Halogen lights carry the same DOT rating, which means that the Halogens are perfectly safe to use.  So the slightly better range of the LED lights may not justify the higher price.

But their lifespan might.  We’ve all replaced halogen bulbs before, because they tend to wear out.  Few of us have ever had to replace LEDs.  They’re practically eternal.  Most LEDs are predicted to outlast the life of the vehicle.  They’re tough, too, since they don’t rely on fragile filaments like Halogens.

But that immortality could work against them in the price department, too.  Why give your Jeep LED headlights that will last 20 years if you’re just going to trade it in in 3-5?  They may increase the resale value a bit, but not as much as you’d spend on the kit.

And that brings us to our final parameter.  How much time do you want to put into it?  On the surface, it seems that you’d spend more time with the Halogens, replacing bulbs when they burn out.  But if you replace the Halogens with the LEDs, that takes a little time.  Swapping them back out to transfer to your next Jeep, or sell off if you’re not getting another Jeep, will take a little more time.  LEDs may also take a little more wiring work, as well.

Now, if we’re not talking about headlights, but a light bar or other auxiliary lights, LEDs are a bit of a no-brainer.  They’re easy to remove and transfer to another vehicle, even if it’s a different vehicle, and they’re good for your entire driving career.  But for headlights, it’s a bit more of a question.

And it’s a question we’ll leave to you, because only you have your tastes and your adventures.  But if you have any questions about lighting, please don’t hesitate to give us a call or check out our Educational Lighting Guide. You ready to start shopping? We can help with that too with our LED Shopping Guide.

What do you think?  Are LEDs worth the cost over Halogens?  Let us know in the comments.