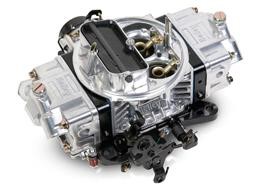 The Holley brothers pretty much invented the performance aftermarket carburetor.  For years, nay, decades, Holley was the go-to name if you wanted to upgrade your fuel delivery system.  You were going to bolt on a bigger Holley carb.  And from the 1950 Ford Police Package to the 1967 Z/28 Camaro to the 1968 428 Cobra Jet Mustang, manufacturers turned to Holley to get the best results for their high-performance special editions.  But the age of the carburetor is over.  Now carbs are to be appreciated for their velocity stacks and intake screens, but not necessarily for their modern power benefits.  Here are 4 reasons you should upgrade your carb to a Holley EFI system.

We know you’re probably not planning to take your prized muscle car out on Christmas eve, but it’s still nice not to have to adjust the carburetor when a cold snap comes through.  The basics: Every engine has an ideal fuel:air ratio to run optimally.  But cold air is denser than warm air, so it requires a different amount of fuel.  In a carbureted system, this is accomplished by a choke, which you can manually use to adjust the fuel flow.  Some carbureted chokes are automatic, but still provide another layer of complexity.

In an electronic fuel injected system, like Holley’s Avenger, the fuel flow is determined by the mass airflow sensor.  Air density is recorded as the air flows through the intake.  That data is fed to the ECU, which will tell the fuel injection system how much fuel to add at any given moment.  So starting up a fuel injected car, even in the winter, just means pressing the clutch and brake and turning the key.

Aside from frigid starts, EFI is more reliable in general.  If you’ve ever owned a carbureted vehicle, you’ll know that they can be…fussy.  There are a great many little moving parts and nozzles and springs and things. 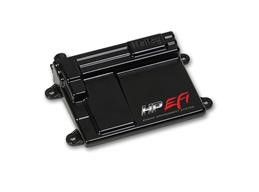 Think about a V8 engine running at, say 5,000 RPM, to be moderate.  Each cylinder fires once for every two revolutions.  That means each injector is firing 20,000 times per minute!  We used to relegate that job to a system that used Bernoulli’s principle and…well…that’s it.  This led to variations, fuel waste, running lean, and choked power.  Even valve trouble.

Controlling fuel rate with a computer, as in Holley’s EFI systems, is vastly more efficient and precise.  Your engine will get exactly the fuel it needs in a given moment.  All the power, nothing wasted.

Fuel injection is easier to service and much easier to tune.

Have you ever cleaned a carburetor?  As mentioned above, there are alot of little pieces.  All kinds of tiny fittings and venturis and balls and things.  Fuel injectors can just be threaded out of the manifold and cleaned.

But now we come to the real payoff: tuning.  In the days of yore, when carburetors sat atop their engines like thrones, getting more power out of them meant replacing those tiny fittings to allow for more fuel.  Or even drilling.  Now, it can be done by plugging in a computer module and pressing some buttons.  Even if your level of tuning does require different injectors, they’re easy to remove. 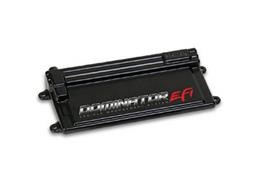 Moreover, the whole system is cake to install and can be accomplished in an afternoon.  There’s even feedback available, so you can know if you’re having trouble with any part of your system.

Don’t get us wrong, here. Carburetors have a distinct mechanical quality and can be quite beautiful.  They should be preserved and appreciated.  But for the most practical applications, EFI is just the way to go.