So you’ve ordered your 2015 Ford Mustang GT, and you can’t wait to get it.  You’re burning to quietly creep it into your neighborhood, turn it off, and let it sit silent in the driveway.  It’s going to be so great when you’re whooshing along country roads, listening to the radiator fan, another bad radio station, and the wind whistling through your windows.  There will be nothing like cutting the engine before you pull up at the car show so as not to disturb anyone.  Right?  Heck no!  For the love of chowder, one of the greatest things about the car is that Mustang GT Exhaust noise!  Don’t trap it in the factory exhaust.  Let it sing with a Gibson Performance system.  And add 32 Camaro-slapping horsepower while you’re at it.

We were supposed to see the first 2015 Mustangs reach dealerships “sometime this fall,” but the leaves don’t seem to be changing yet in Dearborn.  In any case, the new Stang should hit the streets before the end of the year.  Gibson Performance, however, already got theirs, and although we could waste our energy burning with jealousy, we should really be glad, because they’ve used their time well, engineering the perfect cat-back 2015 Mustang Exhaust.

It’s a fact that from the outside, most aftermarket exhausts sound pretty decent.  On a cool summer night, if you have the windows open, you can hear the muscle cars rolling up and down the strip, and you stop what you’re doing just to listen. 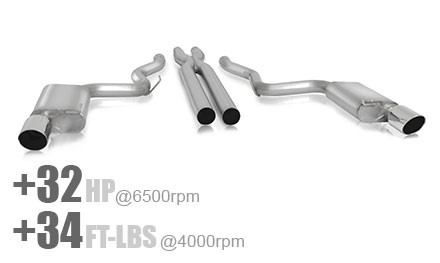 But not every exhaust upgrade sounds as good inside the car.  In fact, it’s disturbingly common that cheap, universal exhaust systems and mufflers tend to create annoying, distracting interior drone at certain RPM.  Gibson was founded on several ideals, but one of them was that your car should be able to sound good from the outside and the inside.  Where most exhaust companies dyno tune their creations, Gibson hits the dyno and then hits the sound lab to completely eliminate drone.

So noise is one thing, but most companies can offer a Ford Mustang exhaust that makes noise.  Not every company can offer massive power gains.  In fact, most exhaust manufacturers don’t even advertise how much horsepower and torque they can add.  Gibson does. 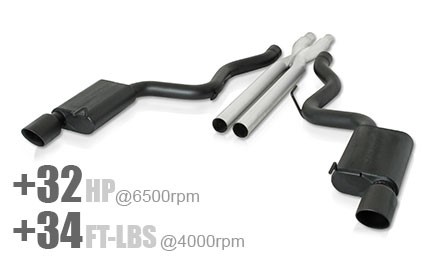 Knowing where to place that power is something else that sets Gibson apart.  The horsepower and torque gains for many manufacturers come way up in the 5-6,000 RPM range, a place your street machine rarely reaches unless you’re already flying.  But getting that power at the low end, where you’ll really feel it, will improve your acceleration drastically.  This is especially important for the torque.  So Gibson tunes their exhausts, including the 2015 Mustang exhaust, to activate the gains at 2-4,000 RPM, right off the line.

Many of those extra horses come from Gibson’s two fold construction strategy: Their patented Superflow mufflers are straight through, and their slip-fit joints are designed to create as little obstacle as possible within the exhaust.  Both of these reduce turbulence, which facilitates flow.

Nor do they just slap together the biggest pipes available.  The diameter of each exhaust system is carefully selected per vehicle, including the Mustang.  Make it too narrow, and the flow is disrupted.  Make it too wide, and you lose torque at low RPM, when you need it most.

Finally, there’s the look.  It’s not the most important part of an exhaust, since you can’t see it most of the time, but it’s nice that Gibson goes the extra mile and offers a choice of black ceramic or stainless finishes on their Mustang exhaust system.

So don’t get jealous of Gibson for getting their Mustang before you get yours.  Just be thankful, because they’re making yours better with a cat back exhaust.